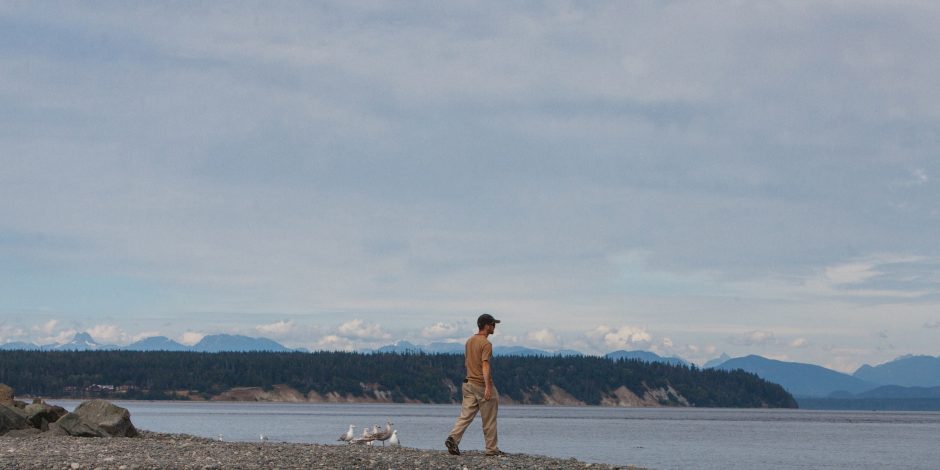 My grizzly attack and run of exceptionally good luck.

Please be advised that the following story contains a graphic description of a grizzly bear attack from the summer of 2019. This story is Colin’s, and he has chosen to share many, but not all, details here for Strathcona Collective readers. Geographically, the story takes place close to Mount Doogie Dowler, which you’ll notice is the same family name as our writer, Colin Dowler. Doogie was Colin’s grandfather.

Alone in the wilderness, hanging from the jaws of a grizzly, and seven kilometres from the nearest civilization, I wasn’t feeling very lucky.

Two minutes earlier, I lurched to a halt when I saw the bear on the logging road while biking back from a night of camping in the hills. As I stood with my bike, he approached slowly. I yearned for him to step into the bush.

Curiosity got the better of him and he decided to see how I would taste. Using my mountain bike as a shield, I fended off his methodical jabs as they intensified in power. He escalated until his paw was so high, I figured I would crumple under his next swat and be pinned under my bike. In desperation, I threw my bike at him. Briefly tangled, he lunged forward and sunk his teeth into my flank. He gave a shake to sink his teeth in and started to carry me down the road. Hanging helplessly, 30 feet or so later, he put me down by the ditch to adjust his grip, biting into the same spot again with a similar little shake to sink his teeth in deeper.

The surreal feeling of being carried by the bear had passed. It was time to fight back. I gouged his eye with my thumb and he went ballistic. The next thing I knew, I was on my back trying to bicycle kick him off of me as he corralled my legs with his paws and thrashed my thighs with his teeth.

He was too much! He pinned me under his 350-pound frame that measured 9 feet nose-to-toe and began biting into my thigh. Not wanting to give up, I thought to pry his jaws off me. I remember thinking how feeble it would be and that there was no way I was going to pry his jaw open. I was desperate so I tried anyway. I jabbed my thumbs under his big, drooling lip and tried to pry his mouth off. I had a good look at his teeth before he let go and bit my hand. I guess I bugged him a bit—after chomping my hand, he moved further down my leg where I could pester him no longer.

He was really digging in. In despair I yelled, “Stop!” and “Why?!” as I heard bones grating and the slop of his jowls. Why was he doing this? Was this it for me? Was I going to be eaten alive or left for dead? I felt guilty that I was abandoning my wife and kids.

Then I remembered my pocket knife—a knife I was lucky to have. My dad had given me this little Buck Knife only a few weeks earlier; it was 80% off at Canadian Tire. I was carrying it instead of my old Swiss Army knife, which I don’t think would have done the job. Thank the heavens the knife was on sale.

He was so content chewing into my thigh and slurping up precious manna flowing from my femoral artery that his guard was down. He had no idea what was coming. While he tore into my leg, I pushed through the pain to get my hands on the knife. It took a while, using all my strength, to work my arms around under his mass. Finally, I had my 3-inch blade open and drawn and I plunged it into the unsuspecting bear’s neck. The assault was over. A great gush of blood spewed from his neck onto my lap. Bleeding profusely, he got off me, lingered for a minute, and retreated into the bush.

I’m content being a pip squeak, but have often thought it would be nice to be bigger. Who knew my “littleitis” had prepared me for this moment and was going to pay off big time. As a little guy playing sports and roughhousing, I always had to dig deep to compete. To survive this, I was going to have to dig really deep. Lucky me! My small frame and chicken legs may have saved my life. I cut a sleeve off and tied a tourniquet high on my thigh. I had just enough material to cinch down a granny knot. As well, it appears his canines bounced off my ribs and hip on his initial strike. His teeth bouncing off my bone may have saved me. I was one cellular layer away from my internal organs being exposed.

Tourniquet on and bear gone, I dragged myself to my bike, pushing with my hands and one working leg. Luckily, my bike was undamaged. However, it was truly disheartening when I face-planted on my first attempt to take off. As I plummeted to the ground, so too did my heart and hopes.I thought I had used everything I had on my first try, nowI had to dig deeper and try again. After wallowing in despair for a second, I used good old-fashioned Dowler stubborn determination to climb onto my bike and stick to my second attempt. I was on my way. It was a lucky thing there were no significant hills to climb on the way back; pedalling with one good leg I don’t think I could have done it.

As I rolled into the logging camp’s front doors and collapsed on the stairs, I was spotted instantly. I yelled, “Help! I’ve been mauled by a grizzly, call a helicopter.” Fatefully, there were five guys there. My wounds were too traumatic for one man to have saved me. It was a team effort. On a normal day in their camp, at that time there would be only one person, but an issue in the field turned the other four back early. Lucky me! Although the trauma I bestowed on those guys may not have been so lucky for them. Those loggers are true heroes and I owe them my life

The paramedics arrived before I slipped away. They came onto the scene exuding confidence, and I knew I was saved. They complimented the loggers’ work and got down to business. They told me I was lucky because they had only recently been given the authority to give blood on the scene, and without the blood my odds of making it back to the hospital alive were slim. They gave me two pints of blood while I lay on the floor. They also took me on my first helicopter ride, straight to Vancouver General Hospital (VGH). They asked the pilot which hospital was closest, Victoria General or Vancouver General, and then flew me to the closest one. It really was nip and tuck.

I went into surgery at 11:30 p.m. that night and emerged six and a half hours later on my 45th birthday. An ecstatic surgeon told me I was lucky; my femoral artery was repaired and they were able to harvest a vein from the same leg to fix it. I was just happy to see both legs—a day earlier I was prepared to be an amputee. Soon I was surrounded by family, love, and excellent healthcare.

I am so damn lucky to be Canadian! I got to see a grizzly bear up close, have a helicopter ride, and a 40-day stay at an all-inclusive with breakfast, lunch, and dinner in bed—all for just $80! (Apparently helicopter rides don’t come for free.) Lucky to be alive, and in recovery, I am surpassing predictions. In the early stages, I was told I would need a leg brace for the rest of my life and never run on a trail again. I haven’t used a brace at all, and am already trail running, but I still have plenty of healing ahead of me.

I will probably be able to ski again and will definitely be able to go hiking and camping—this time with pepper spray at the ready.

Editor’s note: Colin and I spoke at length about him sharing this story and how best to relate this harrowing experience, and there are two things I want to emphasize. The first is Colin’s appreciation for blood donors, and to remind each and every one of you willing and able to donate blood to please reach out to Blood.ca and book an appointment as soon as you can. My personal experiences as a donor with Canadian Blood Services have always been positive–they are professional and kind, and their tagline is “Blood. It’s in you to Give.” The second is that Colin’s story, while very unique, is a story that could happen to any one of us who adventures out in the backcountry (and very often now, the front country). Being Bear Aware is a reality for all of us. We’ll be following Colin’s story up in the spring with more details on wildlife encounters.