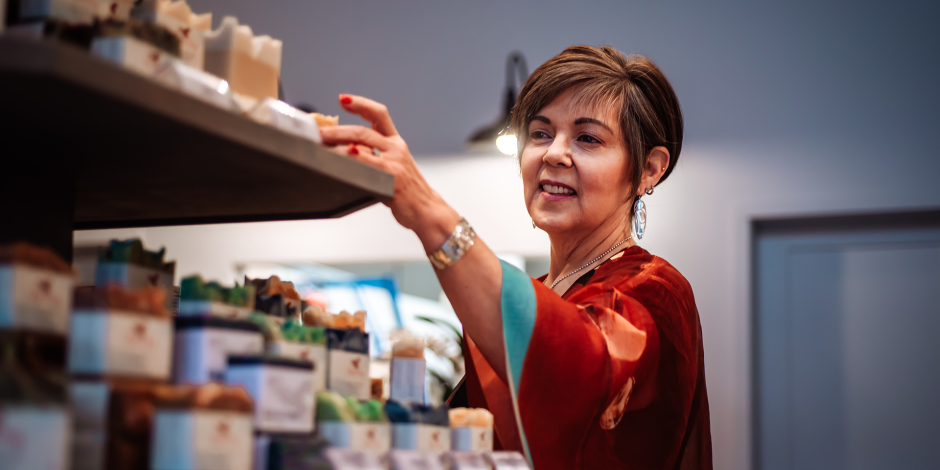 There’s tradition and luxury in every batch of RavenSong.

“I never knew what I wanted to do,” Valerie Lamirande confided to me. She had dabbled in photography, woodwork, and macramé, but it was after receiving a bar of homemade soap as a thank you gift for hosting a baby shower that her curiosity about artisan soaps sparked. “This was 20 years ago,” she admitted, “before you could find recipes for this sort of thing online.” But she found lye at the hardware store and beeswax and oils at the health food store, and started experimenting. “From there, it’s just continued to grow on its own,” she explained.

Before RavenSong Soap & Candle became what the business is now, Lamirande would sell her soaps at local markets. She was eventually encouraged to attend the Filberg Festival in Comox. Before long, she had been invited to speak at the National Soap Making Conference, in Banff, where she won an award for her soaps. Afterward, Lamirande attended the Handcrafted Soap & Cosmetic Guild (HSCG)’s annual conference in Las Vegas and won the award for best soap. “It’s like the Oscars for soap making,” she said.

It was this achievement that caught the attention of Kevin Harrington from Shark Tank. “I thought, why me?” Lamirande said. Harrington’s creative team was so impressed with the quality of RavenSong’s website, social media following, and products—all created by Lamirande—that they were ready to fly her around the world, upscaling massive distribution and production centres. However, she wasn’t ready for that.

“So, it wasn’t a hard decision to make,” she said, when I asked how she was able to turn down the offer from Shark Tank. “I asked myself, did I want to be travelling around the world with my husband or did I want to be away travelling for meetings?”

About eight or nine years ago, RavenSong was still operating out of Lamirande’s home. Her husband joked, while leaving the house one day, that he was going out to find her a commercial space. That evening he came home with what would be RavenSong’s first official storefront. A couple years later, when Lamirande was still operating RavenSong while working as an executive representative for aquaculture, her husband sat down with her. “I thought he was going to tell me it was time to give up the soap,” she admits, but instead, he suggested it was time for her to go full-time in pursuit of the RavenSong dream.

Staying true to her vision, Lamirande began talking with elders about how to infuse medicine into her products. As a Haida woman, Lamirande belongs to the Raven Clan of Skedans. The late hereditary chief was her mother’s brother. She explained to me that, historically, when a chief holds a potlach he gives away everything he owns, demonstrating his power, and the power of his family, to be reborn.

In the villages that are now UNESCO heritage sites, you will often see poles with a long stretch of blank space with rings carved around that section of the pole, each ring representing a potlach hosted by the chief, subsequently announcing his power and wealth. During a potlach, every member of the chief’s family contributes gifts such as canoes, dried herbs, food, or clothing. The Potlach Series soap was Lamirande’s contribution when her uncle held a potlach and named her cousin his successor.

It was the Potlach Series soap bar that won her the HSCB award. Now it is part of RavenSong’s Indigenous line. The Haida stories and mythologies of the clan are reflected in product names like White Raven, Spirit Energy, Salish Sea Thunderbird, and Raven of Skedans. Another RavenSong collection includes Indigenous herbals like Stinging Nettle Powder, Devil’s club and Indian tea, also known as Labrador tea, which Lamirande used to harvest and drink with her grandparents as a young girl. “I get the most emotional feedback from these collections,” Lamirande explained. “That’s what makes it so worthwhile for me.”

Lamirande’s vision was to create a small business that was part of its community, contributing to the local economy with Indigenous, West Coast, and homemade products that were hand-poured and sold within the same facility. She has achieved that.

Many artisan soaps are so beautiful you don’t want to use them. What Lamirande has done with RavenSong is create a luxurious soap bar, with stunning artwork and traditional medicines you actually want to use.