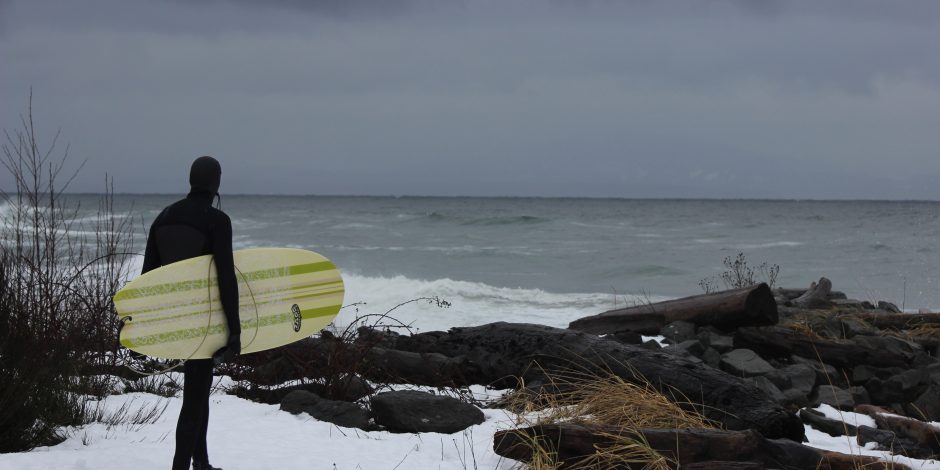 Surfing wind waves during winter is not for the light-hearted.

Picture a howling January morning in Campbell River. Rain pelts down on snow-covered rocks, the streets are full of slush, and the ocean is pumping with ferocious whitecaps. A southeast storm has raged through the night, and wind waves are now thrashing down the coastline. This scene may make you want to stay at home with the heat on, but not us. We are gathered at Stories Beach to assess the storm and get in the water. Is it mad to try surfing in this weather? Perhaps. But in the words of Jeff Spicoli, I think, “danger is my business,” and start suiting up.

Now backing up in time…

Shortly after moving to Campbell River in the mid-’90s, I discovered snowboarding with a fervour. I quickly learned that big storms in town usually meant powder days up the mountain, so my winter recreation revolved around snow. Growing up, I occasionally surfed in Tofino and enjoyed it, but compared to the slopes of Mount Washington and Cain, the West Coast beach access seemed too far. When I was older, I relocated to Tofino for one groovy summer and increased my surfing skills, but gave it up for years after I moved away. Until recently, I had never considered the waves in Campbell River.

Truth be told, I got back into surfing to impress my (now) partner before we started dating. After meeting, we took a few surf trips to Tofino and something reignited in me. There is a feeling attached to surfing that is difficult to explain—and even more difficult to ignore. Chasing that feeling, we searched for rideable waves closer to home. She had been surfing for some time, so we were both motivated to push ourselves and one another whenever we paddled out on those chilly days. That motivation coupled with knowledge and a sense of community among local surfers gave way to a new wintry pastime.

The southeast wind we feverishly chase is created from the Coriolis Effect. As Pat Salamon, local surf board-shaper and wave diehard, says, “Hurricanes and storm air flow (winds) move counter-clockwise in the Northern Hemisphere due to the rotation of the Earth. That rotation creates swell from the southeast that travels northwest. It can start as far south as Bellingham, Washington, gaining momentum all the way to Campbell River. And the longer the storms, the bigger the waves.”

With our first taste of wind waves, we were wrapped up in wonderment. But even with time and experience, surfing in the ocean will always have its danger. During one session, a wave broke with such ferocity that my partner’s leash tangled around her finger and snapped the bone. A freak accident. But one surgery later and she was back to surfing just like she used to. Because anyone who really surfs will always tell you how much they love it. Especially out in these frigid waves that strike our shorelines with the ineffable beauty of Mother Nature.

As with most outdoor pursuits, there are many other natural factors to consider when surfing on the east side of the Island. The wave swells do not behave like Tofino during the cold season. Here, we rely on wind generation, which makes waves come in at faster, more unpredictable periods (of time). With sparse daylight in the winter months, sometimes going out in the middle of a storm is the only option. And during those storms objects are easily pushed around. One must always be mindful of their position in the water—especially with boulders, debris, driftwood, full-on trees, breakwaters, and marine life around (I’m looking at you, sea lions!).

On that howling January morning, we surfed big, frigid waves during a gale-force storm. It was the tail end of a tropical hurricane from the past week, so our crew had all been watching the weather in anticipation of a stellar day to get out there and ride. Waking at dawn to confirm our forecasts with the local buoy, we saw the early-morning swell abating from north to south of town where it stayed firing at Stories Beach for a few hours. We decided to hop in—entering over driftwood that was being violently hurled at us by the flooding tide. Pat snapped some photos, and it was a day that has stood out among the rest.

The morality of surfing in Campbell River does not come easy, and I know there is inherent risk every time I set foot in the water. In all my time, aside from that broken finger, I have not witnessed, nor heard of, many injuries from surfing these storms. Which makes me realize that the people who shred these waves are both competent and capable. So, if you’re thinking of trying to surf in Campbell River during an unforgiving storm, make sure you already have some skill. For in the eye of winter, these waves are not for the faint of heart.