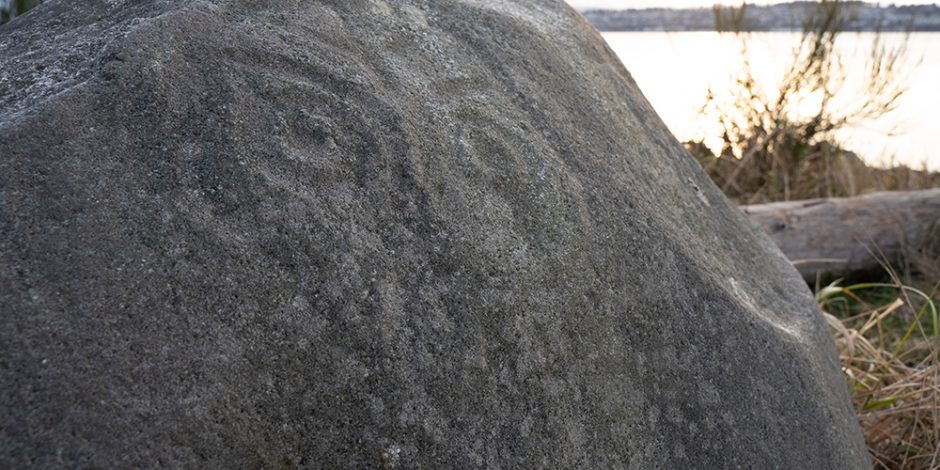 Calling the Rains and the Salmon

The Petroglyphs of Quadra Island.

The sky is alive with distant storm clouds, purple, broken by pockets of sunlight. Looking west across the Discovery Passage to my home on the “big island” feels like stumbling upon my reflection in a tidal pool. Sprawled, rolling hillsides speckled with houses. This was not a perspective of home I viewed often. As a cycling and kayak guide for Island Joy Rides, I had the privilege of exploring Quadra Island and sharing my connection to this land with locals and world travellers alike. The petroglyphs outside the Nuyumbalees Cultural Centre were typically a favourite stop.

A petroglyph is a prehistoric art form that involves creating images through carving away the surface of the rock. There are thirteen sites throughout Quadra Island that house nearly one-hundred carved rocks, which date back to 2500-3500 BP. Local historians and We Wai Kai elders believe that these petroglyphs are symbols created through ceremony to invite the rains and the salmon. The We Wai Kai ancestors would dance and sing, while they pounded stones into the rock to summon the rains. Rain is essential for the health and success of the salmon run. The rains swell the rivers leading out to the ocean, which provides a safer journey for the spawning salmon.

At Island Joy Rides we encourage our riders to abide by The Three Ss: Safety, their own as well as the safety of the group; Senses, to embrace the abundance of life on the island; and Stewardship, to remove any visible trash from water and land. But I’m starting to wonder what it means for me to be a steward of this land. What about the safety of the land? And how can we encourage the land to feel our embrace?

The petroglyphs demonstrate the power of art to transcend time and space through the force of storytelling. The narrative of calling the rains and the salmon could not be more relevant today under the threat of climate change.

The rain and snow have not swollen the rivers as they used to in the past, inviting the swarms of salmon that have given this part of the world its reputation as the Salmon Capital of the World.

The salmon are necessary for the survival of the land. Alive, they feed the orcas, sea lions, and bears. Their decaying bodies, washed on the banks of the river, feed the wolves, eagles, and ravens. Their decomposed flesh and bone charge the soil that feeds cedar, Douglas fir, and hemlock.

Not only are the salmon necessary for the survival of the land, they are critical for the survival of a Nation. The We Wai Kai are a water people. Many families rely on a prosperous fishing season as
a source of income. But it’s not only the Northwest Coast Peoples affected by the drought and decline in the salmon run. Aquaculture is a significant employer throughout the Strathcona Region. After a record dry year, a rain dance might not be enough to save the life force of this community.

As the storm clouds loom closer, I can’t help but wonder if the petroglyphs were carved at a time of environmental decline. Or if the ancestors could have known the significance their creation would have for future generations. To be a steward of the land is to protect it. With their art, the We Wai Kai ancestors have left us a message,
a reminder, to care for the land, as the land has cared for us.