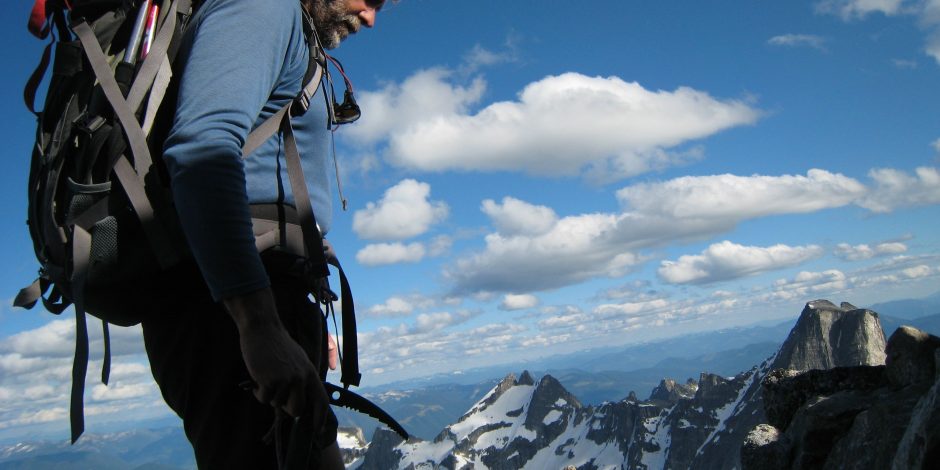 Damn, I Wish I Walked

A life on foot with Chris Barner.

From construction on some of the region’s most iconic establishments, such as Mount Washington and Painter’s Lodge, to laying and maintaining trails in Strathcona Park, like the popular King’s Peak Trail, Chris Barner’s contributions to the Strathcona Region are vast.

Even tracking Barner down is an adventure.

I found him hiking in the sub-alpine, a place he had been spending much of his time recently. For someone with a reputation of being radical or elitist, Barner does not consider his ventures to be hardcore, except when it comes to environmentalism.

“Storms, sun, rain or shine, snow, all of these environments have this unique beauty and specific attraction to the human spirit that goes unnoticed if you’re sitting in a little poison-puking personal transportation cubicle,” he laughs. Barner follows by saying, “Think about what it could mean to everybody if we could all say [that] we prevented climate change because we all chose to walk.”

Barner is always on foot with his climber’s backpack, whether he’s in town or in the hills. He decided not to own a vehicle or a driver’s license, back in 1974, when he was fifteen and first heard of climate change.

“If there’s one thing our society lacks,” he says, “It’s true emotion out in the street. That’s our emotional climate, and it’s in trouble too.”

“I believe in what happens to people when they take on the challenges of climbing,” he says. Coaching volleyball and soccer, as well as leading climbing and mountaineering youth groups, Barner is familiar with the role of mentor. “One of the reasons I’m so keen on using climbing to address the issues of youth is that climbing is an excellent chisel to sculpt the kind of human-beings that a difficult future will require [and] to make difficult choices that come up about the climate.” Physical, psychological, and emotional fitness develop when you’re learning “a tool to deal with fear as opposed to prevent another loss,” as one would with traditional team sports.

Climbing allows us to be friends with ourselves and, to Barner, that’s what it means to have emotional and psychological fitness; to be friends with the emotions that arise during a climb or on a mountain. “Understanding that [you’re] not always going to feel like that. Just keep going,” he says. “No feeling is final.” When asked about his own emotional and physical fitness, after several decades on foot, in the mountains and in the elements, he says, “Since life for me has been one long walk, I’m not afraid to take a long-distance tour.”