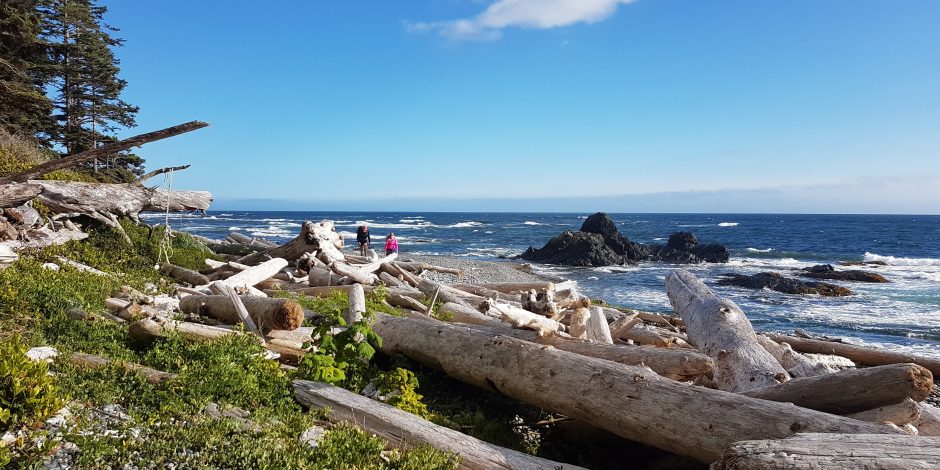 Pandemic times are bizarre. I work in the tourism industry, and I’ve been keeping up on messaging from health officials to be kind, be calm, and be safe: from Indigenous Tourism BC around how to travel responsibly; and from Destination BC about exploring locally. Like many of my friends and family, planning future trips hasn’t really happened since March 2020. But, planning a multi-day hike on a remote island was absolutely necessary.

So when two good friends asked me and my partner, Dave, if we wanted to hike the Nootka Island trail within the next 10 days, we started to make a plan. We talked through how to respect the closed community of Yuquot, where Nootka Island Trail hikers generally finish (we modified our route, with recommendations from the team at Air Nootka), we discussed water sources, potential wildlife encounters, sleeping arrangements, weather, safety considerations (both wilderness hiking and COVID-19), and food. We re-assessed what we already owned, borrowed some gear from friends, then visited our locally owned outdoor and food stores to buy a tent, dehydrated food, hiking boots, socks, energy bars (and candy!), and a sleeping pad. For some, this spending may seem extravagant, but to me, adventure gear is a long-term investment into health and safety, and into experiences that are meaningful for my mind, body, and soul. I wore the same hiking shoes that I had purchased two years ago for the Sunshine Coast Trail, my coat came from a consignment store around that same time, and I basically wore the same shorts and shirts each day of the trip. And, while a chartered seaplane ride to and from a hike may seem excessive, the distance we travelled from our home to Nootka Island is only 115 km (as the eagle flies) within our very own Strathcona region.

Keeping an eye on the weather all week, we made a team decision to push the trip back by one day, which resulted in us getting to fly out on a sunshiny day instead of one pelting rain. On the day of, we all assembled at Naomi and John’s house and drove out to Gold River together, arriving at Air Nootka just after noon. (While carpooling was a factor in that decision, so too was the ability to all go out for dinner at the pub in Gold River after we had completed the hike.) Prior to departure from Campbell River, our safety plan was emailed to Naomi’s sister, complete with emergency contact information for each hiker, our designated pick-up time, date, and place, along with a timeline and instructions for what to do if we did not communicate our successful return home. Thankfully, no emergency contact was called!

As a fly- or boat-in destination hike, Nootka Island Trail demands and rewards explorers with its terrain, weather, and viewscapes. Guided by our weatherproof map and John’s previous experience on the trail, we carefully disembarked from the plane, loaded our packs onto our backs and set off through the forest to the pebbly beach for our first day with 8 km of hiking. With the long summer days on our side, we enjoyed hours and hours of daylight, never more than 100 metres from the shoreline, and the melodic sounds of ocean waves rolling and crashing onto the rugged West Coast. Each and every step I took was purposeful, especially when maneuvering across Billion Boulder Beach while walking into unwavering winds blowing across the Pacific Ocean, through muddy bogs peppered with wolf tracks, and scaling down rocky cliffs on a rope suspended from a tree trunk. While I was anticipating moments of deep thought, I was pleasantly surprised to notice that I really wasn’t thinking much at all. I was simply absorbed in the raw elements, placing one foot in front of the other and being where I was.

At times, we all hiked within 20 metres of one another, and at others, we intuitively kept at least one other person in view. No one was getting left behind and no one was charging ahead. We took breaks, we gathered for meals (lightening our packs!), we watched sunsets and moonrises, we gave each other space, and we got all up into each other’s space too. From face plants in the mud to splashing around in waterfalls, we laughed, we pushed ourselves, we connected, and we simply revelled in the experience of being away.

Getting to hike the Nootka Island Trail was a gift. We live in such a spectacular part of the world, with diversity in people, ecosystems, and lifestyles. This time is both chaotic and grounding, and I am thankful for shared moments, beautiful friends, and this gorgeous place I get to call home.