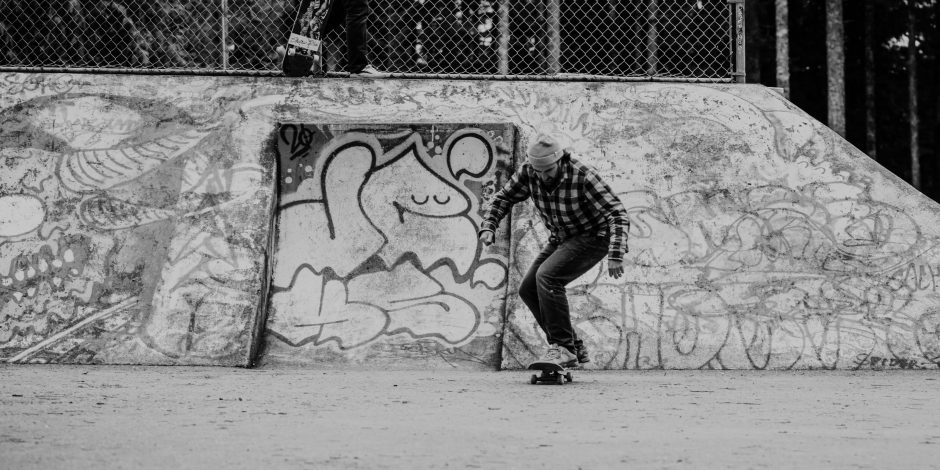 A generation of skateboarding culture on Quadra Island.

In the late ’90s, while Marshall Toelle and Nate Cherrier were teenagers growing up on Quadra Island, skateboarding was their whole world.

The Quadra Island Skate Park was built on the grounds of the Community Centre off West Road around that time and instantly became a second home to kids in their community. Now in their thirties, Toelle and Cherrier can still be found skating there with the friends they made more than twenty years ago.

As teens, Toelle and Cherrier lived a short walk from each other’s houses so would meet on the road and skate along the rough pavement until the Haskin Farm Trail that goes through the forest to the park. If they made it as far as the trail without getting a ride, they would take the half-hour walk through the woods to the park. “Skateboarding was our lives,” says Toelle. “I remember Nate once saying to me, ‘What do you think people who don’t skateboard do all the time?’ I had no idea.”

The development of the park itself was a huge community project, supported by local volunteers and numerous fundraising initiatives to see the project break ground in 1998. In those first years, the park hosted events and skate competitions which brought in hundreds of spectators from surrounding communities. “Back in those days the Quad Park was new and innovative,” remembers Toelle. “People would come from all over the province to skate the park and camp out in the woods during competitions.”

“That park saw so much traffic on a daily basis,” recalls Cherrier. “There would be dozens of kids flooding off the school bus daily, including a bunch of kids from Campbell River. I couldn’t even begin to estimate the amount of time my friends and I spent there growing up.”

Today, Toelle and Cherrier are the minority, seen as the ‘old guys’ at the park. “Skateboarding is incredibly hard on the body,” says Toelle. “Only a few years ago, there were two summers in a row where I broke fingers. I reached a point where I thought I’d give it up completely, but here I am. It’s been a part of my life for so long and contributed so much to who I am, so I just keep coming back to it.”

The park holds a lot of memories for them that they still reminisce over now. “Quadra Park has some gnarly features,” explains Toelle. “There’s the steep Concrete Hubba Ledges that were modelled after San Francisco’s famous Hubba Hideout. Our friend AJ Smith was the first of our generation to attempt to step up to them, and he took a slam there while trying to grind down the ledges, busting his front teeth up. There were bloodstains on the concrete for weeks where he fell. It was an iconic bail.”

The two friends say that the skateboarding community they’ve built has helped shape who they are, and they cherish the friendships made. In their circle, skating is still very much a part of their lives as adults. “I have young kids of my own now,” says Toelle. “They can barely stand on the board, but they have a blast riding it with me or scooting around on their butts.”

Their friend group remains tight-knit to those who they skateboarded with as teens, and it’s something that unites them even now in adulthood. “So many of these guys are still skating to this day, and that’s pretty unique for the sport, “ Toelle explains. “Nate treats skateboarding almost like a job, and his dedication to it is insane. Most people – including myself – start to regress in our abilities after our mid-twenties, but Nate keeps getting better. These guys are the people I spent the most time with growing up, and I still consider them my best friends.”

While it’s seen as more of an individual practice, skateboarding is also very much about the collective experience. “No matter how much life changes for all of us, that bond built through skating remains,” says Cherrier. “Skating is so difficult. I feel like doing it through youth and adolescence builds a serious level of perseverance and work ethic that you will carry with you throughout the rest of your life. Falling down, getting back up, making yourself try again and again, overcoming fears, and pushing forward — that’s what skating is about, and that’s what life is about.”

“If you’re trying to learn a trick, you can attempt it over and over and there’s nothing to stop you other than your own level of determination,” says Toelle. “When I was younger, I would routinely spend two or three hours straight working on learning a new trick. Sometimes tricks would take weeks or months, and when you finally learn that trick, there’s no feeling like it.”

Skateboarding will be making its Olympic debut in Tokyo this summer with both park and street disciplines in the men’s and women’s categories. As a sport known for its street culture, music will also play a big part in the events, adding to the overall youth-centric atmosphere at the venue. With this recent announcement, skateboarding is gaining new popularity and acceptance in the sporting world.

Cherrier has seen the sport change a lot throughout his lifetime. “The progression of the tricks has elevated monumentally,” he says. ‘It’s common for me to see kids half my age at the skatepark doing tricks that I could never have dreamt of doing at any point in my life. The female skate scene has also blown up in recent years and it’s great to see a more diverse mix skating together and having a good time.”

For Toelle and Cherrier, skateboarding has deep roots in their upbringing and is something they hope continues into the next generation. With this new global attention on the sport, they anticipate a surge of interest in local skate parks like their own. “The Quad Park was really where it all began for us,” adds Cherrier. “What I appreciate most about those early days is the lifelong friendships that were built around skating there, and to this day, it’s a space we can return to and have that same united feeling come flooding back.”