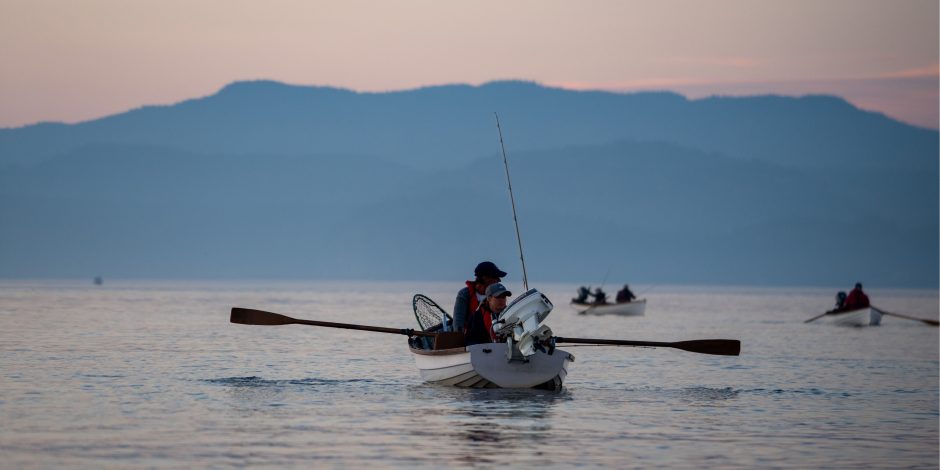 Embarking on my maiden voyage.

Having been born and raised in Campbell River, Tyee fishing has always been a tradition for me.

On a warm summer night, sitting in the rowboat with my parents, or one of my uncles, wasn’t anything out of the ordinary. After spending a few years away from the island, the west coast called me home. It wasn’t until I returned that I truly found the joy and excitement of Tyee fishing.

A Tyee is a Chinook salmon that weighs 30 pounds or more. To become a member of the Tyee Club of British Columbia, the elusive Tyee must be landed under the club rules. I soon learned it was much more than just fishing. A leading element of the Tyee club tradition is the classic vintage rowboat.

Three years ago, I was lucky enough to get my own rowboat. One which came with a great history. The boat belonged to Don McIver. Don was a humble man, a silent hero among our community, and an environmentalist who had a passion for everything outdoors. The boat itself is an original 12-foot Lapstake rowboat built by, Campbell River boat-builder, Ed Painter, in 1952. I felt honoured that this boat found its way to me and I couldn’t wait to embark on my maiden voyage.

The magic of the Tyee Pool begins while most people are still sleeping. For me, the magic is the ritual of heading down to the estuary, in the darkness of the wee hours of the morning, with only the stars and the setting moon to guide me. It’s hearing nothing but the chimes of spoons and plugs rattling against the rods and the rumble of the old kickers firing up, as we launch to catch first light.

While the mist rises and the sound of oars dip into the saltwater, my rower, usually my older brother , Neil, instructs me on how many pulls of the line to let out. However, my superstition tells me to give an extra pull for good luck. With the tension and clicker set, I watch my rod pulse from the action of the spoon as Neil rows along the shore, back and forth, weaving through the morning fleet. I stay focused on the tip of my rod, as if somehow the meaning of life would be revealed. The silence only broken by the buzz of a reel and the distant holler of “Fish On!” Patiently, I await my first strike, which sadly does not come.

Any failure to land a Tyee is more than made up for by the beauty and the absolute tranquility of watching the sunrise over Quadra Island, illuminating the water around me. Often on a mild summer evening, I will notice groups of people gathering along the shoreline at ‘the Spit’ to watch the silhouettes of rowers as we, the fisherman, faithfully anticipate our lines to tighten. Sitting peacefully in an old rowboat, only a foot above the water reminds me of being in a different era, when it all began. As the summer slips into fall and the colours of the fish change with the leaves, their incredible journey is almost over, while mine, has just begun.