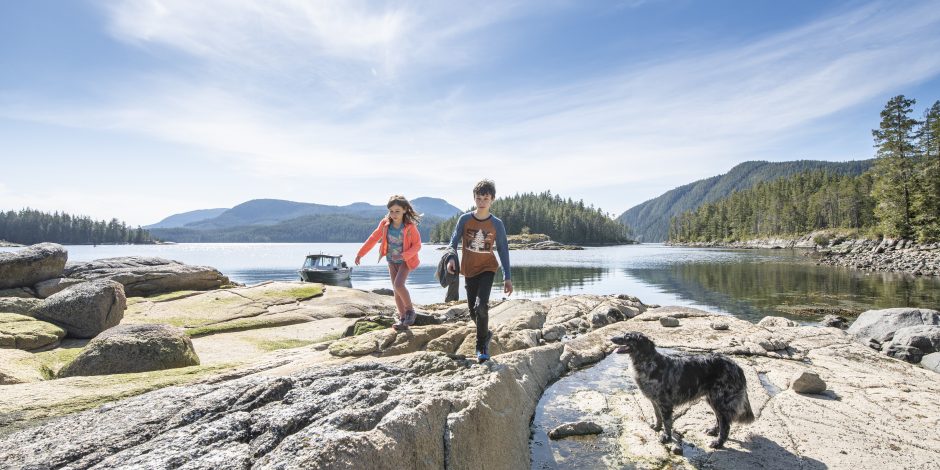 Our young residents reflect on the home they’re growing up in.

My name is Jonah. I’m 11 years old and I live at Blind Channel on West Thurlow Island. My family has lived at Blind Channel for four generations and now runs a resort and water taxi business. We’re an hour and a half from Campbell River, the nearest town, so my sister, Charlotte, and I are homeschooled.

My family and I normally travel to town by getting on one of our four boats, driving to a small campground at Rock Bay where we dock, enter our truck, drive up to the highway on a small logging road, then travel by highway for 40 km. Sometimes, we have to bring our boat into town for repairs, and on those days, if the conditions are wrong, the trip home can get pretty rough.

Every Wednesday, we go to Robron Centre where we drop off our work, spend the day learning and interacting with other homeschooled students, and then leave at 2 p.m. When we’re at school, my parents do errands and grocery shopping for the week.

One dark Wednesday morning, in December, 2018, Charlotte and I were woken up by my dad at 6:30 a.m. to get ready for a school day. After breakfast with the family, we headed to the boat.It was becoming grey on the horizon, and it seemed we got lucky because it wasn’t raining. But early mornings in December are dark, so Agnieszka, my stepmom, had to bring a flashlight with her. We boarded the Excalibur 1 and began our journey. We had to take the boat right into Campbell River that day, so we settled in for the long ride. As we rounded Chatham Point into Discovery Passage the sun rose above the forest-covered hills and shimmered on the smooth water.

Nothing unusual happened that day until about 6 p.m., when we were picking Charlotte up from dance and preparing to head back down to Discovery Harbour where the boat was docked. The wind began to howl from the southeast, which meant big waves and sheeting rain! When we arrived at the dock, I opened my van door and the wind ripped it out of my hand. I was soon soaked from the rain. We hurriedly loaded the boat and set out into the darkness. I was understandably feeling very nervous as we left the relative safety of the harbour. Soon, we were being pummeled by large, breaking waves and it felt like we were on a rollercoaster.

Then I said a bit shakily, “Dad, I think most people would think we are crazy if they saw how we get home from school!” I’m pretty sure his response was, “You’re probably right, Jonah.”

My dad is an experienced captain, and he just went slowly over the waves. I remember one wave that must have been 6-feet tall. When it hit us, all I could see was spray. Soon, we had left all the lights of Campbell River behind. The darkness was so intense, we couldn’t even see the shore, let alone familiar landmarks like Chatam Point and Elk Bay. After about 45 minutes of plowing through two-to-four-foot waves, acres of driftwood and logs swelled out of the darkness. Dad had to slow down to eight knots so the wood wouldn’t damage the prop.

Finally, we turned into Mayne Passage and in 5 km we would be home! Mayne Passage separates East and West Thurlow Islands and was overlooked by Captain George Vancouver who believed the two islands were one. For this reason, it was called Blind Channel, later changed to Mayne Passage. The little bay where we live has kept the name of Blind Channel.

I was very relieved when we got home. Charlotte and I ran over to our grandma and grandpa’s house where grandma was cooking a delicious meal. We had dinner while Agnieszka told the whole story to my grandparents.

That day was anything but normal for us. On most trips the water is relatively smooth, but every time the winter storms and raging southeasters hit, I am reminded of that adventurous trip home from Campbell River.

To learn more about Jonah and his family’s history, check out blindchannel.com/our-story, and Jonah’s guest blog for the Museum at Campbell River: rmuseum.ca/2020/04/26/strangers-in-the-woods.