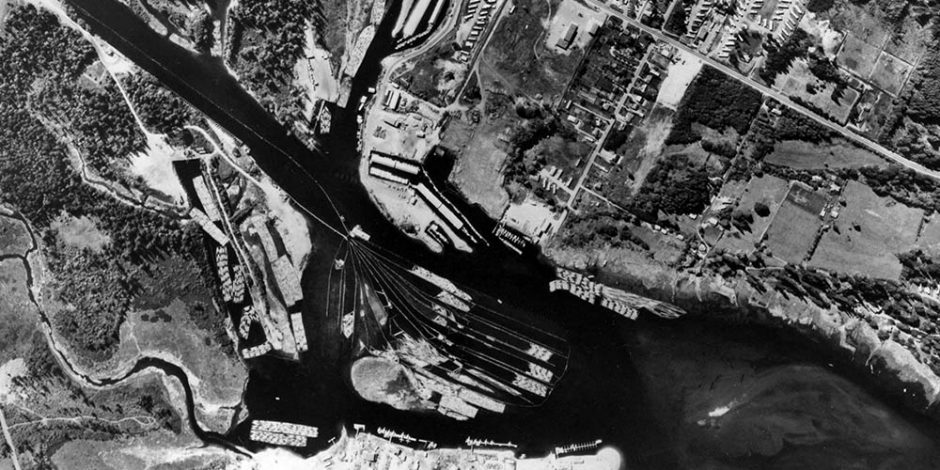 The history of the restoration of the Campbell River Estuary.

I live near the estuary, so I walk the Raven Trail and Baikie Island on a regular basis. The estuary is also my favourite place to go paddling with my family. At high tide you can launch at the Tyee Spit, then work your way up the river, exploring little channels and watching wildlife. It truly is a remarkable place. I’m not from here, so although I knew that a lot of industrial activity had been taken out of the estuary, and a lot of restoration work had been done, I didn’t fully grasp the extent of the transformation. As it turns out, an estuary restoration of this scale had never been done. Not on Vancouver Island, not in BC, not in North America, not anywhere.

Estuaries are the critical habitat where the river meets the ocean. They are one of the most productive ecosystems on the planet, hosting a unique community of plants and animals that thrive on the ebbs and flows of the tides. Salmon smolts need this transition zone as they move from fresh to salt water to continue on their life cycles, and the aquatic plants that form the extensive estuary marshes benefit from the deposition of nutrients from upstream. People have made estuaries their homes for as long as they have inhabited the earth. Estuaries link the marine and river trade routes, and the areas are highly productive for agriculture. The abundant life provides many food sources for the inhabitants of these areas. ƛ̓ əmataʔakw was the name of the Indigenous village located on what is now called Tyee Spit in the Campbell River estuary.

In 1922, the Spit, including the village site, was sold by the Indian Agent to International Timber Company, and the community had to move away from the Spit. That same year, Ned Painter built a cabin and established a tent camp and boat building operation adjacent to the village on the Spit in order to accommodate the sport fishermen coming to Campbell River to land a famous Tyee salmon. The Tyee Club that established on the Spit became entrenched, while decades of increasing development happened around them.

A report from 1972 showed that, by then, 86% of the estuary was leased for industrial activities. Banks were being destabilized and eroded, vegetation from the banks, marshes and river were mostly destroyed, gravel was being removed and sold, barges were coming in and out of the area spewing pollution, log booms were dropping bark into the water that was choking out the ecosystem at the bottom of the waterways, and dredging was happening continuously to facilitate the movement of boats and logs. A 1977 biologist report outlined the seriousness of the condition of the estuary. At the time the report was not released to the public, for fear that its contents would be “taken out of context by the general public.” The implications of the recommendations would require a radical shift in the way the estuary was used, and local politicians were not sure that the community was ready for that. The discussions at City Hall were reported by the Campbell River Courier on March 14, 1975. When the report contents were brought up at the City, then Mayor Ken Forde and Alderman Wallace Baikie claimed that the ecologists “wanted to wipe out all industry in the estuary to the detriment of the community economy.” Forde went on to say, “As far as the ecologists are concerned they couldn’t give two hoots for the industry here. I’m thinking of the importance of industry now and in the immediate future for this area. I’m thinking about jobs.” To that Alderman Peter Johnson replied that the ecologists “were seeking something for the benefit of the community and future generations.” At City Hall and throughout the community, the issue sparked heated debate about preservation of job-creating industries versus the ecological importance of repairing the estuary.

In October 1978, a group of local residents decided that there had been enough inaction and it was time for citizens to get organized about taking action to save the estuary. The Campbell River Estuary Protection Association was created with the goal of encouraging relocation of industry that posed a hazard to the ecology of the river. However, it wasn’t until 1994 that an Estuary Management Plan was created, providing direction as the City moved forward with what was an ambitious plan to restore this area.

Over the next five years, significant efforts were made to identify and begin the restoration work needed. In 1999, the Nature Conservancy of Canada, the City of Campbell River, and the Tula Foundation teamed up to purchase Baikie Island, a small island in the Campbell River Estuary. After extensive assessments, they began to rip up the concrete, create backchannels, plant native vegetation, plant eelgrass beds, and re-establish shorelines. Baikie Island’s restoration became the main focus of the work being done in the estuary.

Today, Greenways Land Trust has the maintenance contract for Baikie Island Nature Reserve. More and more residents are rediscovering the estuary, and the years of the damaging practices of the past seem a distant memory. But it is too early to walk away from this place. “A lot of work has been done, but a lot of the estuary is still heavily impacted by industry. There is a lot more work to do,” explains Cynthia Bendickson, Executive Director of Greenways Land Trust. With many areas having compacted soils, re-establishing native trees and vegetation has been challenging, especially in the upland areas. These areas are quickly filling with Himalayan blackberry, purple loosestrife, and other invasive plants. Yellow flag iris and other invasive wetland species are spreading rapidly in the restored marshes. In some old log booming areas the substrate is still not recovering, so eelgrass is failing to thrive as was hoped.

Jim Van Tine looks back at the years he spent working on this project, and echoes Bendickson’s thoughts about the future. “Even though we have partially brought the estuary back, we need to be vigilant about identifying future use and maintenance needs, including needs for park space and educational opportunities. There is still some industrial activity happening, however the balance has shifted so that now those areas compromise a small percentage of the estuary.” Greenways has been applying for grants to proceed with some of the bigger projects, but in the meantime is relying on volunteers with work gloves and shovels, as well as partnerships such as the one with the Wei Wai Kum First Nation. The Nation has been working to re-establish the deltoid balsamroot on the Spit, a plant that is now considered endangered primarily due to habitat loss, as well as working to limit damage to marsh vegetation caused by the abundance of geese using the area. The Nation is approaching the project with long-term vision. Corey Cliffe from the We Wai Kum Nation has been working tirelessly on this project. “We are studying the way our ancestors built fish weirs to model how we build the enclosures around the marsh vegetation. We are using alder poles, rather than the re-bar that is commonly used. We look at stewardship using a seven-generations approach. What method would our ancestors have used, and what would be the most beneficial to the landscape in the long-term?” He is hoping to move towards using pre-soaked cedar and willow to build a living fence system that will not require ongoing maintenance. The Guardians of Mid-Island Estuaries, a science-based non-profit organization focussed on estuary restoration, is providing support to this project and other similar projects on Vancouver Island.

The efforts thus far have been impressive, with many organizations working together with a common vision. It would be easy to look back and say, “Look what we have done!” without looking forward and saying, ”What can we do?” Sixty years ago, it would have been almost impossible to visualize the estuary the way it is today, and now we can’t imagine how it could ever have been left to get so damaged in the past. I challenge you to make sure that there is a lasting legacy of estuary restoration that doesn’t end with the passing of a generation. Thirty years from now when my son takes his kayak to explore the estuary, I hope he looks back and says, “Wow, I remember when…”