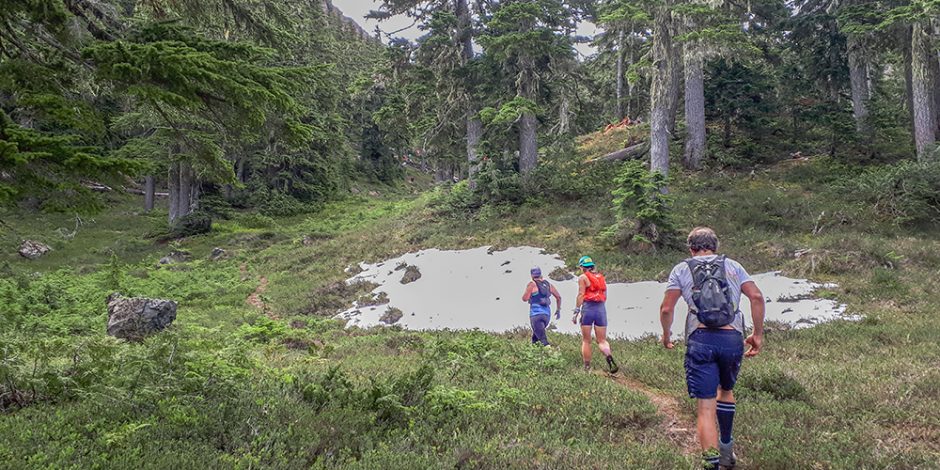 From avid runners to adventurous explorers, an increasing number of people are being drawn to the quaint North Island town of Sayward every summer to answer the question posed by Kusam Klimb Organizers: Are you tough enough?

The pounding of heavy footfall, crunching on inclined gravel,
is loudly competing with the sound of your laboured breathing. Meanwhile, the jackhammer of your heart pounds in your ears from the inside. Your body’s protest to what you are doing is undeniable. This was not part of your vision. Only 2 km into this race. It’s gonna be a long day…

All 1473 m of total elevation gain is completed in the first 7.7 km of the Kusam Klimb’s total distance of 23 km, and no matter how fast and fit you are, the descent won’t come soon enough. “Are you tough enough?” is the race’s tagline, and that question will ring in your ears throughout this epic climb.

More and more people are drawn to the quaint and quirky North Island town of Sayward every June. According to Bill West-Sells, the creator of the Kusam Klimb and builder of its trails, 2004 was the first year of the race, and the number of racers has only grown since then, from 137 to 514 in 2019.

The Kusam Klimb website states that the fastest recorded time is held by a born and raised local North Islander, an accomplished and sponsored mountain runner Nick Elson, originally from Campbell River, now residing in Squamish. In 2015, Nick finished in an astonishing 2:07:10. I consider myself a mid-pack runner and have run Kusam as a race and as a training run 8 or 9 times in the last few years. Even at my fastest, I was only arriving at the saddle, the highest point in the course (yet the low point directly next to Mt. H’Kusam’s summit) in just over an hour and a half, and I cannot imagine moving any faster.

Not racing for a spot on the podium? No worries, you are in good company as the majority of people finish anywhere from 5 to 13 hours. Volunteers and supporters will be there until the slowest overall racer claims the Turtle Award; in 2019 the recipient was Paul Martin with a time of 13:14:39. Although Paul may have been the slowest, he wasn’t the oldest, as Glenn Hardie from Powell River claimed that title at 82 years young! I will never forget him, as that was the year I volunteered as a Checkpoint 2 Race Marshal, and as I watched him trudge up the snowy saddle in his jeans and golf shoes, my jaw dropped and my respect soared.

One of the most beautiful things about the Kusam Klimb is the diverse group it brings together, from elite mountain and ultra runners from all over the province, country, and world, to everyday local people who would never otherwise have considered hiking Mt. H’Kusam. This well-supported event enables people to push themselves to do whatever their very best may be.

Like all challenging endeavours, the Kusam Klimb starts with a vision. Maybe the vision is to break the course record or to get a personal best time, or to merely finish. In any case, all “Klimbers” have come together to travel on the same terrain, but they all do so in their own way. Sometimes the roots on Kusam’s ascending trail are quickly and nimbly hopped over, and sometimes they are important handholds, integral to preventing loss of balance.

I’ve had the pleasure of racing side by side with some individuals in this eclectic mix, and supporting others when I volunteered as
a Checkpoint 2 Race Marshal.

Ironically, while at the highest physical point in the race, surrounded by the most stunning mountain and valley views on a clear day,
I witnessed many Klimbers at their lowest and most depleted physical states. The elite and highly trained athletes made their way through the second checkpoint quickly, barley glancing over their shoulder as they thanked me for being there, emitting their grit and tenacity which lingered long after they were gone.

Those who move slower though, who are much younger, and much older, and less fit and inexperienced in mountain terrain, those who struggled and took the time to rest, refuel, and tend to aches and pains, shared their stories with me. Sometimes there were tears, there was always a lot of sweat, and occasionally there was some blood. They were simultaneously elated and depleted. They envisioned the top for a long time, but at the same time, thought they would never make it.

What began as a means for West-Sells to gain freshwater access from Springer Creek to his cabin home, turned into a labour of love that gives anyone the opportunity to climb the mountain.

It is truly humbling to become part of a Klimber’s big moment— whether they are breaking a record or breaking the mold of their former self. There are few greater things than supporting the actualization of someone’s vision, and the story to be retold and relived in many moments of pride.

For the last 16 years, local people and businesses have been coming together to support one of Sayward’s biggest events, by sponsorship or by volunteerism. The small-town charm of this community shines brightly and its warmth embraces all Klimbers, creating a sense of belonging and unity at this low-key, grassroots event.