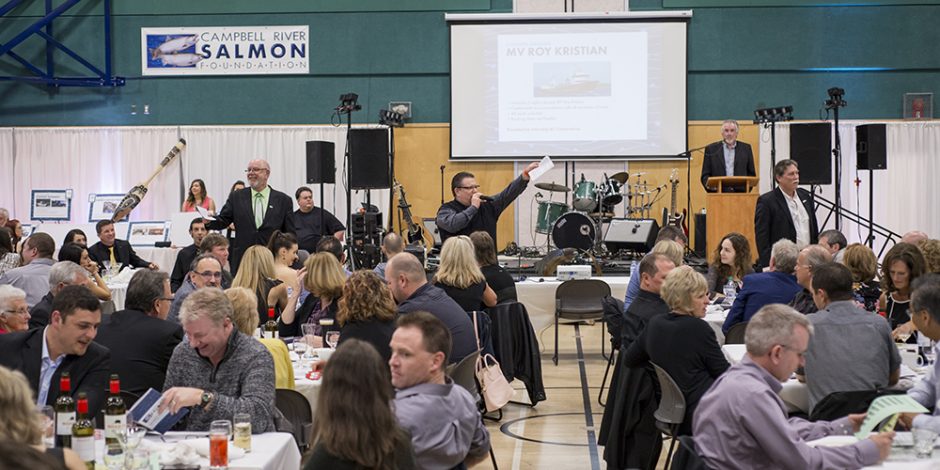 How one night of celebration supports a community vision.

Did you hear? Campbell River has one of the highest rates of volunteerism in the country. Therefore, by the numbers, most Riverites have a story to tell. Here’s mine.

The first time I volunteered for the Campbell River Salmon Foundation (CRSF) Annual Fundraising Dinner was in 2008. I was relatively new to town and was starting to get to know the good folks at Greenways Land Trust. So when they asked me if I was interested in helping out with the Salmon Foundation, I said yes. It was a hoot. My fellow volunteers were a great group of people and my job selling raffle tickets was easy—the prizes were amazing and those in attendance were eager to support the salmon.

As most Campbell Riverites know, these charity fundraising dinners are a key part of what makes Campbell River so special. People come together for causes they care about. Over the next decade, I volunteered at the event a few more times and attended as a guest in other years. Whether I’m spending money or collecting it, selling tickets or buying them, I always have a terrific time.

Over the years, I gained more of an understanding of the history of the CRSF and the extent of the work they do. Here’s what I learned. Maybe you’ll find it fascinating too. The Campbell River Salmon Foundation was formed in 2007, so the first year I volunteered was also the first annual dinner for the organization. (At the time, I had no idea it was the first. It seemed like such a well-oiled machine.) In previous years, the Pacific Salmon Foundation (PSF), based in Vancouver, would host charity fundraising dinners for salmon conservation and restoration projects in cities throughout BC, and Campbell River was a huge contributor to the overall success of these dinners.

Funds raised at the annual event directly support salmon restoration and conservation projects of varying size and scale, from the Oyster River in the south to the Salmon River estuary in the north. Some of the projects supported include new spawning channels in the Quinsam River, replacing spawning channel gravel in the Campbell River just below Elk Falls, salmon otolith research, streamkeeper activities, and educational campaigns.

The CRSF is one inspiring example of how a small group of very committed volunteers can and do make a direct and significant contribution to the Strathcona region. By combining fundraising efforts into a community gathering of over 420 guests, 30+ volunteers (I’m there again this year!), and numerous financial and in-kind contributions from businesses and organizations connected to salmon enhancement in the region, the Campbell River Salmon Foundation Annual Fundraiser and its subsequent activities are integral pieces of our interconnected community.

As one who creates, plays, and explores in and amongst the salmon ecosystem, I am happy to find ways to contribute to their health and vitality. With numerous not-for-profit organizations in our community, I encourage others to find ways to connect with the cause(s), people, and places that resonate with you.