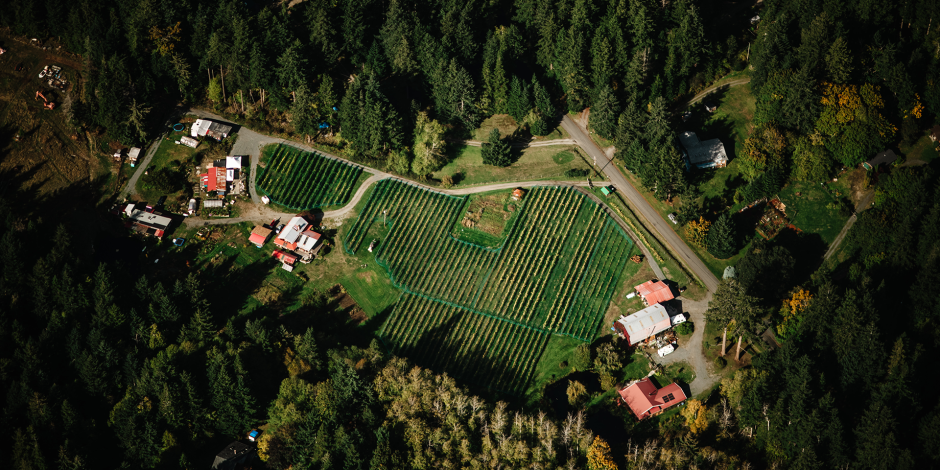 In a way, a farm is like the ocean, a fixture of the landscape, yet in constant motion. Every season brings a part of the farm to life, or sees the end of a crop; every year brings a new project, so the landscape slowly changes over time.

The farm also moves according to the will of the farmer. My wife, Jill, and I have many ideas we want to see realized. Our original goal was to have a farm that supports our family by providing good wine and food to our community, while being (cliché alert) as environmentally friendly and sustainable as possible.

SouthEnd Farm is located at the southeast corner of Quadra Island, on the traditional territory of the We Wai Kai First Nation. The land has been farmed under the stewardship of my parents since 1977. Prior to that, it had been the site of my great-aunt and uncle’s vegetable garden, which they began in 1944. Our part in this history originated as a vague retirement dream (inspired by a remarkably bad bottle of wine) that rapidly accelerated when I got a job at the now-defunct Elk Falls pulp mill. We were able to move home and get started. We were in our late 20s.

We began work on turning the farm into a vineyard in 2003, clearing land and planting vines in once fallow fields. Jill used the design of the winery and vineyard as the thesis for her Master’s Degree in Landscape Architecture. The research phase was particularly fun, as we had to sample a lot of different wines to select the varietals for planting. Our final selection for whites were Siegerrebe, an early ripening variety with Gewürztraminer-like character, and Petite Milo, a hybrid developed by Valentin Blattner that is mildew resistant. For reds, we selected Marechal Foch and Léon Millot as they both would ripen reliably in our climate and are disease resistant. The combination of early ripening and disease resistance means the vineyard can be cared for through plant management and without the use of sprays, essential in moving towards our goal of sustainability.

Our winery opened in 2009, the same year our first child was born. Now, I advise against starting a family and a business at the same time! The winery building was originally the woodshed that served as our wedding pavilion some years earlier. We converted it into the winery in 2008, then moved the tasting room from the log house to the winery building in order to consolidate the operation. Last summer we expanded the hardscape area and added an event tent, which really brought a festive air despite the limitations of the pandemic.

After 13 years of wine making, we have added a distillery to the business to take advantage of the tank bottoms that would normally have been discarded. This has been a great addition, allowing the winery to produce only premium wine. Any wine that we aren’t happy with goes to the distillery. The initial products were gin and brandy; we are now moving into fortified wine and vodka.

Caring for the vineyard, making wine, and distilling aren’t the only farming things we do. We’ve been slowly expanding our activities to include a slaughter licence. We pasture meat birds in chicken tractors to provide a source of ethically raised meat on Quadra. The chicken tractor moves around the property so the chickens enrich the soil with their movements as they pass by. We find them hilarious to watch. Jill started flower gardening as well, which adds to the beauty of the landscape. A small market garden business will be expanded in the coming years. Our herd of screaming Nigerian dwarf goats and our flock of geriatric laying hens round out the farm life.

In the spring of 2021, we introduced another feature. The Shack, initially just a single 8’x10’ room, began 10 years ago as a place for friends and family to stay. An additional room for a shower and kitchen, and a separate building for the toilet were added soon after. Eventually, we built a covered deck between The Shack and the washroom. Then we put it up on Airbnb for people to enjoy. We encourage our guests to refer to themselves as #shackpeople on Instagram.

For the last nine years, Jill has been running the whole operation alone for half the time, while I worked as a Process Engineer in the oil sands. That phase of our lives is over, and I now work on the farm full-time. Since we first started farming 18 years ago, we have grown the business from more than a hobby to something that supports our family from the land, like we originally hoped.

With both of us on the farm full-time, change will happen faster and the unexpected will become probable, here at SouthEnd.