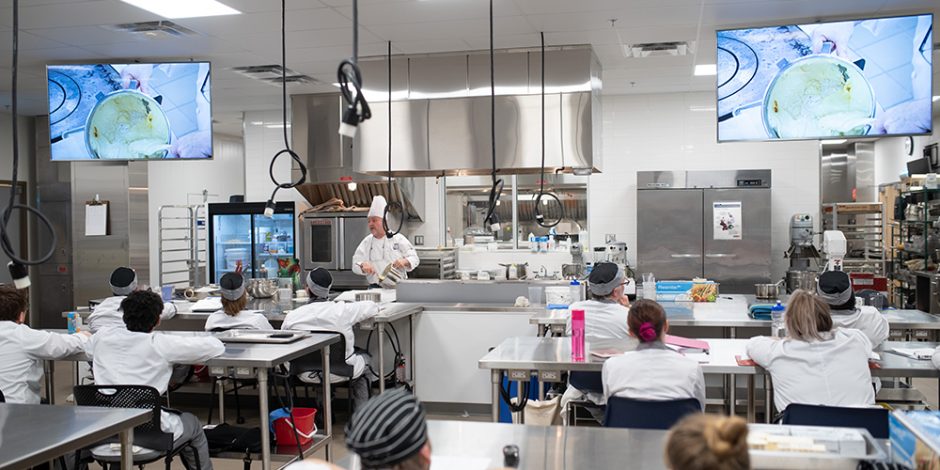 How North Island College’s new bistro space has gone from vision to reality.

North Island College (NIC)’s expanded and renovated Campbell River campus has transformed the look and feel of the College’s Dogwood Street location, and provided a new energy and vision for post-secondary education in the River City.

“It’s hard to describe how much of a difference the new space has made to the campus,” said John Bowman, NIC President. “When you walk in the front doors, it’s so welcoming and bright—it’s a space you want to learn in. There’s never been a better time to be a college student in Campbell River.”

NIC’s new campus features six interconnected educational neighbourhoods radiating from a vibrant Student Commons area. NIC Recruiter Renae Roles has spent the last few months touring prospective students and community partners through the new spaces. “Everyone who comes here is blown away by the look and feel of the new space,” she said. “Even though it’s only been a few months, it’s hard to remember what it was like before this—it’s just a natural feeling.”

The expansion includes new buildings for NIC trades programs including Heavy Duty Mechanical, Aircraft Structures, Aquaculture and a new trades building and lunch area for Timberline students. The heart of the expansion is the new Student Commons, which is home to the new bookstore, Library, and Learning Commons, and the new cafeteria and bistro space to serve NIC students and the public. “The Third Course Bistro has developed a strong reputation in the community as a unique dining experience,” said NIC culinary instructor, Chef Xavier Bauby. “This new space takes that experience to the next level.”

The Bistro is supported by a brand new, state-of-the-art teaching kitchen. Designed with input from Bauby, the kitchen is modelled after Le Cordon Bleu in France. “Being able to build a teaching kitchen from scratch is a dream as a culinary instructor,” said Bauby. “We were able to claim the space and make it our own.” The amount of space is what strikes visitors who step through the swinging doors. The kitchen is divided into a prep and cooking area, with individual work stations for each of the 16 culinary students in the program.

“Having their own work station gives students the space to not only develop and refine their skills, but to breathe and create – and enjoy the artistry of culinary creations, which is what fuels the passion of all chefs,” said Bauby.

Nationally recognized chef and NIC culinary alumna Tina Tang returned to campus in the fall as part of an event with Culinary Team BC. “I told Chef Xavier I wanted to come back to school just so I could learn in this kitchen,” said Tang. “The culinary program here was extraordinary before, but this new facility really steps it up to that next level.”

The Culinary Team BC event served as a fundraiser for the team for their trip to Germany to compete in the Culinary Olympics. “Having this new facility and being able to host these kinds of special events is a wonderful learning opportunity for our students, but also wonderful for members of the community to experience the talent and skill of such high-calibre chefs,” said Bauby. “It’s been amazing to watch it all come together.”

The completion of the campus renovation marks a new chapter in post-secondary education, with increased offerings in high-demand careers like early childhood education and health care assistant, state-of-the-art trades shops for foundation and apprenticeship training, increased numbers of business and university transfer courses, and the development of new programs. As NIC finalizes its new strategic plan, the Campbell River campus will be a key feature in its vision for the future of education on the North Island.