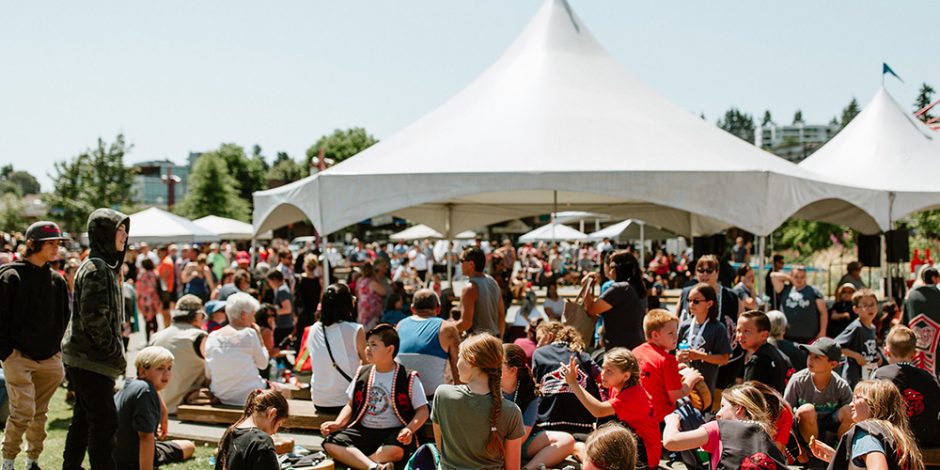 Where Community Gathers and Spirit is Celebrated

A story of the City of Campbell River’s Spirit Square.

Big cities often have large central areas where citizens
can congregate. New York has Times Square, London has Trafalgar Square, even Victoria has the Inner Harbour Causeway with the Empress Hotel as its backdrop. And the City of Campbell River has Spirit Square!

How did this happen? Back near the turn of this century, someone in government had the brain wave that small towns and cities in BC would benefit from something like that. The vision was to create easy-to-find, easy-to-use spaces where townsfolk could “gather, socialize, and share community pride and spirit.” This initiative became the Province’s way of celebrating 150 years since British Columbia became a crown colony. And by putting up some money—up to $500,000 per community—the government’s 2006 Spirit Square initiative helped small communities such as Campbell River build, “a public space similar to a traditional town square.”

In that era, small towns with natural resource-based economies like Campbell River were struggling. Forestry, mining, and commercial fishing were all feeling the impact of growth in international industries and markets. So a very practical city council was understandably skeptical of a government initiative that didn’t clearly help small local businesses stay afloat. According to the Campbell River Courier-Islander in 2006, the mayor of the day, Charlie Cornfield, spotted an opportunity. “Anytime I can spend a dollar and get another dollar, I can spend two dollars but only half of those dollars are ours,” he is reported to have said. He summed up, saying, “We can double the money, [which] is going to local contractors, it’s keeping local people employed, and it’s fixing up the downtown area.” The mayor’s vision and his spirited logic led to a ‘yes’ vote, and Campbell River’s Spirit Square was on its way.

Since then, Spirit Square has been a core feature of downtown. Tall metal poles painted in distinctive dusty pink and dark red mark the roadside edges and support the canopy over the stage area. Directly across the street from Spirit Square sits the vividly fuchsia pink Tidemark Theatre, with a courtyard link to the muted-grey (with vivid blue trim) public library. Across the street is the Centennial Building which houses the Campbell River Art Gallery and the Visitor Information Centre. Voila! Campbell River now has a cultural district.

Groups as diverse as the Canada Day Committee, a student- led Climate Rally, and the Japanese Cultural Society have all found Spirit Square to be a great place for showcasing their talents. One of the most complete events utilizing the Square’s amenities is the annual National Indigenous Peoples Day, celebrated on June 21. That morning, hundreds of local and visiting Indigenous people paraded from the nearby Big House. To the beat of many drums, people of all ages made their way to Spirit Square. The current manager of Spirit Square, Jim Creighton, was there to greet them.

“That really moved me,” he said during an in-person interview. “Seeing that parade of people being drummed into the Square was powerful.” There, under canopies set up for shelter, booths displaying cedar bark handicrafts, Metis-style beaded products, and intricate jewellery were ready for customers. The aroma of bannock (fresh fry bread) wafted across the Square. (That booth had a line-up most of the day!) In the centre, traditional drummers and singers created a rhythmic soundscape for the day’s activities. An artist spread his colourful paintings across the concrete steps to be admired by people, Indigenous and otherwise, drawn by the sound of the drums. As Creigton says, “Music brings the world together.”

In fact, music has been a huge factor in Spirit Square’s evolution. In addition to being Square manager, Creighton is also an accomplished amateur musician, well-familiar with the music scene on Vancouver Island. By carefully watching the audience response over numerous events, he has chosen bands that can handle a diverse crowd. The music has transformed summer Thursday nights into a must-go event. When new Campbell River resident Barb was asked if she had ever been to Spirit Square, she said, “Every Thursday night! I never miss one!” That’s the kind of reaction that sees seniors carrying lawn chairs, young parents packing kiddies and wheeling strollers, and curious tourists all aiming for a clear view of the Spirit Square stage.

Folks of all ages and varying physical and mental abilities settle in with their care-giver escorts near the front row so they can be quick to the dance floor. When the band hits the first few beats of a danceable tune, the local line-dancers boot- scoot to a clear space, and then everyone joins the dance. The people-watching is as entertaining as the music! This dynamic diversity could be a challenge but Creighton’s face lights up when he notes “how accepting the town is, has become.”

So it looks like the provincial and municipal government’s vision of small cities and towns having a place to gather was a good one. Through the magic of music and the creativity of the Square’s manager and users, Campbell River’s Spirit Square has given many people plenty of reasons to gather in the centre of town. As Community Planning student Brian McLoughlin says, “The inspirational aspect of public space is that people will come together there.” That inspiration has become a reality in our beloved Campbell River. Seems like ex-mayor Charlie Cornfield could have been the guy who said, “If you build it, they will come.”